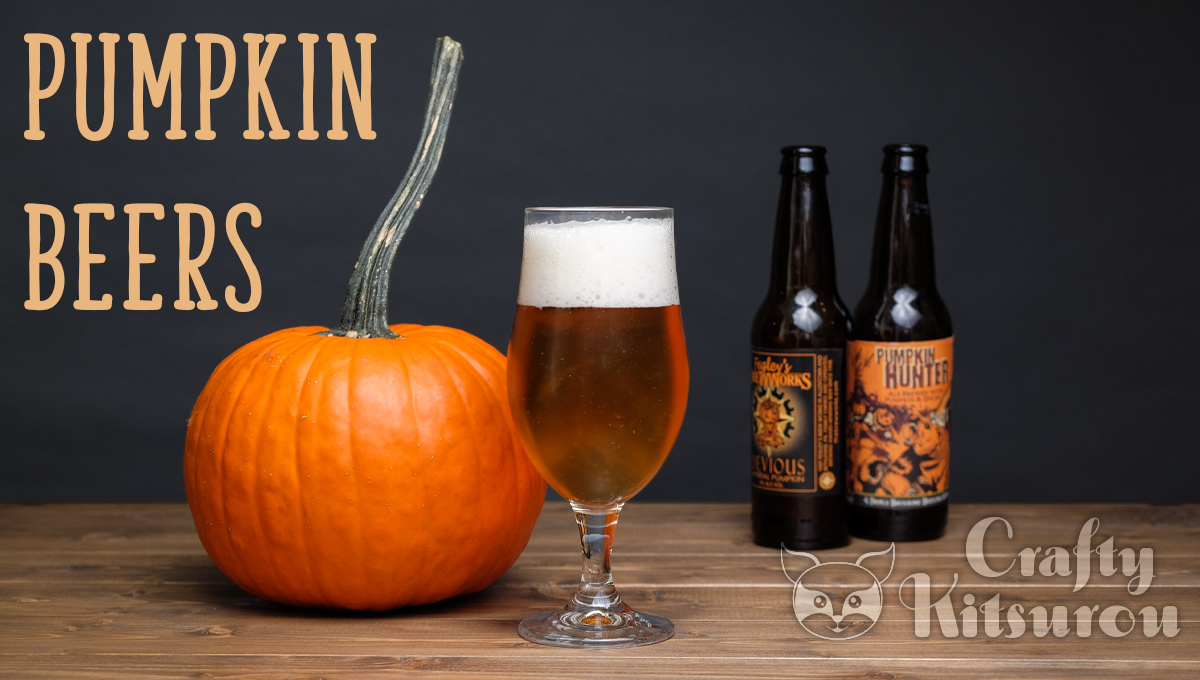 Ah, fall! When the IPAs of summer are replaced with the spicy, malty brews of autumn. From September to November, taprooms and beer stores carry my favorite fall beer, the pumpkin beer.

You may be wondering what makes me qualified to talk about beer? Two things: I have taste buds, and I have a blog. No need for pretense here, anyone can drink a beer and know if they like it or not. No special education required.

My personal preference: I like malty, darker beers, with a strong pumpkin flavor. I don’t like bitter, and am not a fan of hoppy.

These tasting notes are just my opinions and reactions to the beers I tried (Spoiler alert: My brain is a strange place and sometimes makes strange associations. Example: I once tried a beer that I described as fruity, with a hint of adhesive bandage. My husband liked the beer, was horrified at my description, but conceded that my review was 100% accurate.)

You don’t really need to know this stuff, but just in case you don’t and you want to, here it is in super simplified form:

Hoppy: floral, usually bitter taste (although you can have hoppy without bitter).

ABV: Alcohol By Volume. The higher the percentage, the higher the alcohol. Here’s my super standardized (aka totally made up) chart of ABV %:

Note: These are just my crazy opinions, shared for your entertainment.

⭐️⭐️⭐️⭐️½  Pumpkin beer with cranberries. Good balance of spices, slight cranberry taste without being too tart.

⭐️⭐️⭐️½  Hoppiest of the pumpkins that I’ll drink, but not bitter at all. Subtle pumpkin flavor. Decent fall beer.

⭐️ This is terrible. It tastes like someone mixed flat coke, lemon juice, beer, and regret.

Out of Your Gourd

⭐️⭐️⭐️⭐️½  Pumpkin pie in a bottle without being too sweet. If you want a good beer packed full of pumpkin flavor, this is your beer.

🌟🌟🌟🌟🌟 This is my favorite of all the beers on this list. It’s a darker boozy beer, so if you only like light beers, this is not the one for you.

⭐️⭐️⭐️⭐️ Pretty good, but I view it as a weaker version of the Devious.

⭐️⭐️⭐️⭐️½  Tastes like maple and pumpkin, even though there is no pumpkin. It is actually made with butternut squash. Very good.

⭐️⭐️⭐️ Unfiltered, subtle pumpkin. Good if you like unfiltered beers.

🌟🌟🌟🌟🌟 Excellent. Spices are more akin to pumpkin bread or muffin, than pumpkin pie.

⭐️ Tastes like a pumpkin candle. Sickly sweet, and artificial.

⭐️⭐️⭐️⭐️ Pumpkin spice flavor with a little bit of heat. Strong cinnamon (which I love). Doesn’t build to an unbearable heat like some spicy beers.

🌟🌟🌟🌟🌟 The barrel aging overpowers the pumpkin. While it no longer tastes like pumpkin, it now tastes like a spicy, vanilla bourbon beer. Excellent!

⭐️⭐️⭐️ Crisp, spice flavor. Pumpkin is subtle, and it gets bitter after the first sip or two.

⭐️ Too much pumpkin spice. Too sweet. Too gross.

⭐️⭐️⭐️½  Strong maple spice flavor. Sweeter than I usually like in a beer, but not sickly sweet. More of a dessert beer.

⭐️⭐️⭐️⭐️ Strong pumpkin and cinnamon flavor without being over the top. Pumpkin pie aftertaste.

Best pumpkin plus other flavor:

I need to buy more of:

Seriously though, these are just my opinions expressed in my quirky manner. I mean, “regret” isn’t actually a flavor- although I certainly regretted drinking it.